Get To Know BRAEVES with Punk Nation!

Long Island's BRAEVES began as a band of childhood friends, who pulled together to produce worlds of wonder through imaginative music. With some time and the addition of a couple members, the group has honed in on an unparelleled sound that's soaked through with, well, bravery. We recently chatted with BRAEVES about their debut EP, the first BRAEVES show and where they go from here. Check it out below! 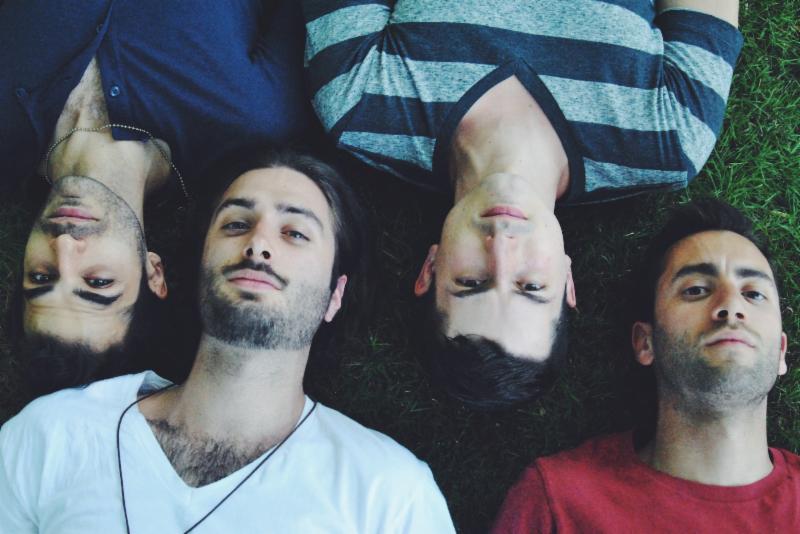 The music you make has a very interesting, dreamy and creative vibe wrapped into every note, which makes us wonder — What’s your headspace like when you’re writing?

Ryan Colt Levy : I like to think it all comes from a place of positivity, even if lyrically something comes off "dark" or frustrated. It's such a cathartic experience being able to put your honest feelings, however clear or abstract into motion. Our song ideas always cater to moods more than a definitive, predisposed design. More often than not, it will come from a scene in my head, or state of mind that we'll try to frame and set a tone of feeling. Lyrically, it's similar in that I can have lines come to me at random that link together later on to create an overall image or vibe instead of telling a direct story. I like the idea that things can shape-shift over time.

The latest member added to ranks of BRAEVES is Nick LaFalce. How did this come about?

Nick LaFalce: I had been playing around the city in various bands and in various capacities when I finally decided I wanted to start my own group. Not expecting much, I took out an ad on Craigslist, which was a trip in itself. So after a nice "range" of responses, I came upon Derek's. His note immediately stood out, as it was in English, relevant to my post, and didn't direct me to any overly-animated MySpace pages. Most importantly, he cited a lot of similar influences (Local Natives, The Beatles, Deathcab), sent me a track the three of them had recorded, ending the email with "What the worst that can happen?"...In hindsight, this was Craigslist so there were a lot of bad things that could have happened, but against my better judgment I met up with them anyway, and here I am.

Your debut EP, Drifting by Design, is set to be released on September 9th. With such an important milestone in sight, let’s get retrospective. Thinking back on the past few years, what are the most monumental moments that brought you to this accomplishment?

Levy: In the days of Myspace, as another band, we completely assembled a national tour on our own. From booking shows and bands out of state, to creating every flyer and sending them out while we were in our living room in NY. We lined up dates from NY to California and back for a two month stretch without any plan of sleeping arrangement. It was the most surreal, chaotic, beautiful, insanely incredible experience, and it proved that this was the life for us.

Derek Tramont: In late 2012 myself, Ryan and Tim (Tommy) decided to record a something together. We didn’t really know how many songs we wanted to record or what kind of record we wanted to put out, but we did know we had to do figure something out, quickly. So after tons of sushi talks and The Wire marathons we decided to tackle a song we’ve been kicking around entitled “Moon Island.” The thing of it was, the song is over seven and half minutes long and we had a even crazier idea to record this monster live to tape. So we called up our friend Mike Kirsch who had a makeshift studio in his basement and even though it was cold and smelled like most concrete basements do…we nailed the final version in a couple of takes and mixed it on the analog board while the song was playing. It was definitely a cathartic and memorable experience to say the least, and essentially kick started what we’re doing today.

Tell us about the very first BRAEVES show.

Tramont: Ryan and I have been playing together for many years and have played hundreds of shows together, but we only became BRAEVES about a 2 years ago. The first show that we played together was at The Rock Shop in Brooklyn and it went over incredibly well. We got an amazing response from the crowd and the venue itself has awesome acoustics, so it sounded great. We even played our first cover, a somewhat edgier version of the The Beatles “Come Together” and all of our friends and fans seemed to love it - it couldn’t have went over any better. All in all it proved to be the perfect stepping stone for us as a band to figure out where we needed to go and what we needed to change.

Where does the band go from here?

Tramont: We are just about ready to release our Debut EP 'Drifting by Design’ set for September 9th and we have a ton of shows planned in the Brooklyn/NYC area. We will be at Cameo Gallery on Sept. 13th for our Release show and Baby’s all Right with Snowmine on Oct. 12th. We’re looking forward to playing at various clubs around here for the coming months before we take to the road for some regional touring. It’s important we play for our fans in our hometown first and create something here, something that people will hold on to.

Thank you for taking the time to have us on here, we deeply appreciate it. Be sure to check out our newly launched website at www.braeves.com.

Oops, you forgot something.

The words you entered did not match the given text. Please try again.

Oops! This site has expired.

If you are the site owner, please renew your premium subscription or contact support.